Governments and their LGBT / NGOs Fetish

*Deep Breath*
Usually I do not consume the writing habit unless I am highly provoked to do so, recently alot of atrocities has been going on around me, and some seemingly good things as well; But thanks for Leil’s POST for being the last straw to write this post.

Let’s start by the most recent good thing, which was a trip to Tunisia, a country I've always wanted to visit, and there I learnt- through a workshop- the International Mechanisms of Human rights. This trip was enlightening in so many ways, and it had memories and company I’d like to keep.

When you read that you might think “It’s a pleasant thing to know more about your rights” but the unfortunate realization that came to me the deeper I dug into that workshop was not Pleasant, but more or less disappointing, which was:

To realize that all my rights: to love, to live safely and in privacy, to own a choice, to have access to a fair trial or good water, or good innovative education, all that and more is nothing but a bunch of Declarations and Pacts debated between politicians that run the world based on personal interests (also called Diplomacy) and fought over by a Bunch of people who dare enough to fight those politicians (Also called NGOs or CSOs) and who has -in order to win a nibble of the golden ticket for their cause (a.k.a your right)- to Use that very same Despicable Lingo of those politicians!

Honestly, I did not want to come back to my own country, nor stay in Tunisia. I wanted to perish, I could not believe that I have to go back to that hideous spot of evolving pessimism called Egypt after all that I learned now about the whole world. And I did not want to even remember anything remotely related to anything I have lived, loved or cared of... I wanted a Reformat.

What I just mentioned is what Every person might be passing through, now or through a phase of his/her life, it's more constant when you’re a Human Rights defender, and Even More and More constant when you fall into what Micheal Foucault called “Person in Crisis” in other words “a Social reject”... And here I mean when you find out you’re Gay/Lesbian/Trans or Queer.

Our glorious “Ministry of Love” has been playing around with what seems to be their new "GIG", Catching and Crashing any remotely reported “Faggots gathering spot” (They use that term in the headlines) , Demeaning them in every unethical way possible, usually Forensically and by the use of the Media they bless.

Questions here are: - Have they found out that publishing the details of a detainee and exposing their faces and full names illegal? Noooo!
- Have they thought of the Facebook (that is not even so ethical in its own) policy that "Forbids publishing of any homophobic content", and allows - on report- to erase that content? Hell no, man. NSA is my bitch!
- Are they actually sure that the “Accusations” they allege are actually true, or is it just another “Mona Iraqi” Propaganda that ended up ruining innocent men lives, who weren’t even Gay as they presumed?
- And finally, do they realize that there is no legal code in Egypt that prohibits Homosexuality, albeit, Transsexualism being actually legal according to the Syndicate of Medics?

The Majority of you might know of "Youm 7" newspaper, that has been noticeably focusing on homo/trans crashes performed by the police recently, starting the infamous "Gay wedding video" a few months ago. The newspaper's editor in chief Khaled Saleh and a long list of executive editors in chiefs, desk manager, editorial managers...etc. non of them find any shame or blame in publishing any info, fake or true about people and ruining their lives, the worse, is that they never get caught, or accused, nothing!

Here are captions of the latest “Gig” of which youm7 published, but it wasn't as "boastful" as the Media office of the Ministry of Interior: 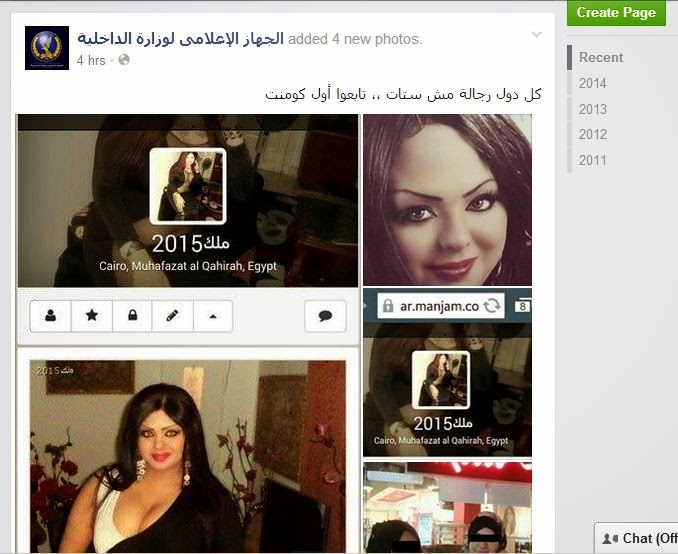 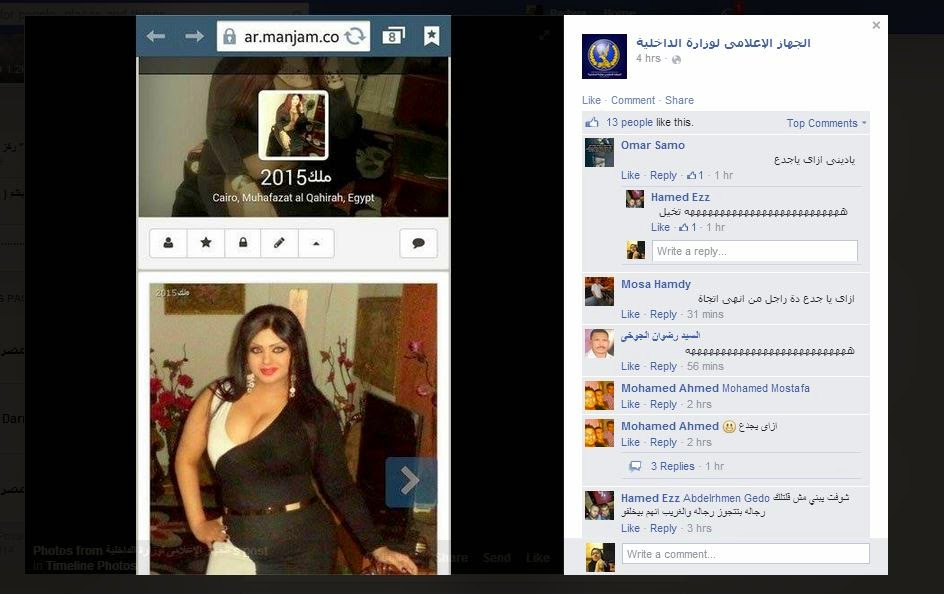 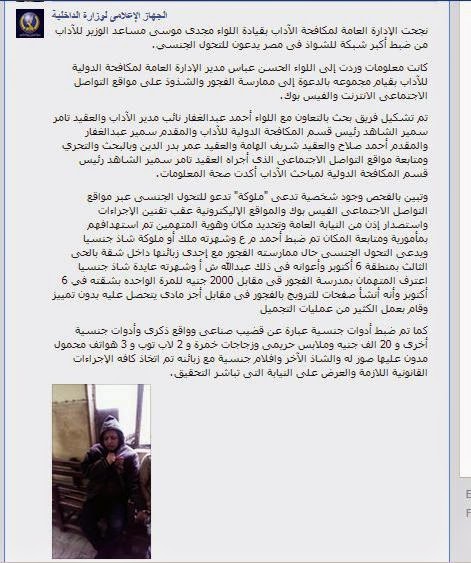 And be my guest and Try to report that and wait for them to have your IP Address from the FB Administration.

This is not the only thing that makes Egypt a live animate tar monster crawling over your body, the crack down on Activists and Activism Spaces weather Law Assistance or even non-profit community work is escalating day after day:

-The 2 years of imprisonment for Al-Ittehadiya Peaceful Protesting, Hanan Mostafa, Nahed El-Sherif (Bibo), Yara Sallam, Salwa Mehrez, Sanaa Seif (who just turned 21) along w/ 18 others all Under the age 40. 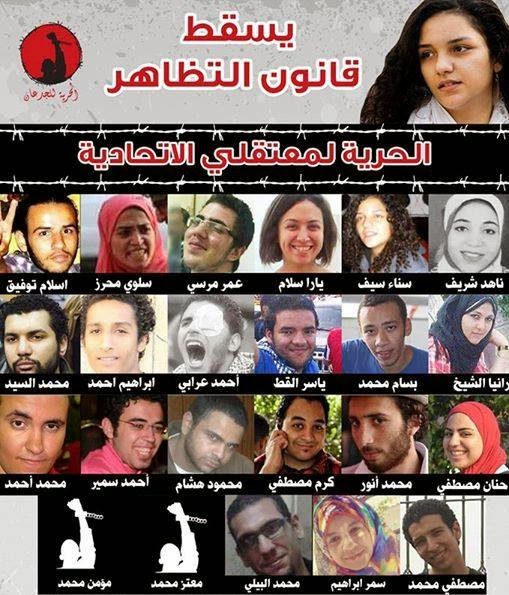 - The crack down ordered by Gov. officials against “Nebny Foundation” that has built a school in a dumpster (Literally) to teach kids who were going to their prep. education and didn’t know how to read and write their names, and they taught them reading, writing fluently in just few month, knowing that everything in their work was legal and the Minister of man-power actually attended their celebration LINK


These sort of systematic violations of human rights of which i have only mentioned a very few, should stop, and it will stop, by any and every way possible and impossible. One would be mistaken if they thought that any one can accept such a filthy way of living, and such a disgraceful judiciary system.
Last but not least, just like I usually say- and now it is Def. proven to me via Legal procedures internationally- That countries do NOT accept LGBTIQs or apparently respect human rights or condemn their violations out of its own desire for so called “Democracy”, “Tolerance” or “Development”, But out of PURE DIPLOMACY (It’s all a matter of a Global Image not to be ruined in the favor of Interests being fulfilled) because they themselves are either violating rights of their own, and/or have a long Cultural history of Homophobia, and Racism (Israel, and US for Example).

So, this is a Salute to all the frontline defenders, those who defend their lives for things they didn’t choose, to those who realized that you don’t have to be Black to defend Ferguson, You don’t have to be an Ikhwan to defend people of an Islamic background to have a fair trial even if you disagree with them drastically, to this one who suggested that we don’t send Mona Iraqi to trial because of how atrocious our judiciary system has become :) To all those who will revenge their torture and humiliation in police stations, to every student being thrown in prison because of a ham headed hound who thinks a university campus is a football pitch owned by his family.

This work is licensed under a Creative Commons Attribution-NonCommercial-NoDerivs 3.0 Unported License.